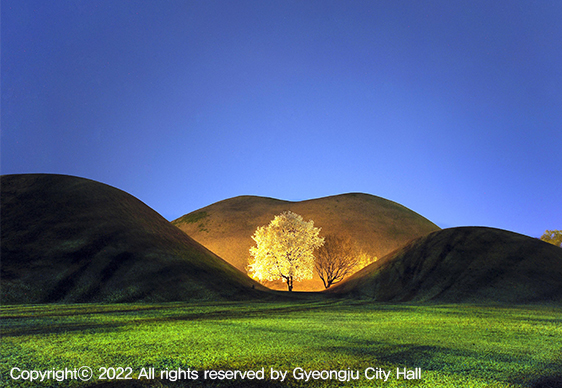 Ancient remains are scattered in the area around Daereungwon, where 23 ancient tombs from the Silla Dynasty are gathered on a large land of 126,500 square meters. It takes a considerable amount of time to look around the inside of Daereungwon. The tombs that should be noted include the 13th Tomb of King Michu, Hwangnamdaechong Tomb, where the huge Pyo Hyeong-bun catches the eye, and Cheonmachong Tomb, where you can look inside the tomb.

Hwangnamdaechong Tomb is the largest tomb in Gyeongju, with two tombs connected north and south like the backs of Ssangbong camels.
During the excavation and investigation in the 1970s, as many as 57,000 artifacts were found.In the northern tomb, accessories such as women's belts, necklaces, and bracelets, including gold crowns, were found, In the southern tomb, relics centered on men's bones, gilt-bronze crowns, and weapons are presumed to be the tombs of men and women.

Another tomb representing Daeneungwon, Cheonmachong, is not far from Hwangnamdaechong. It is a picture of a heavenly horse that looks auspicious and cheerful as if the Jade Emperor is riding in the sky. The Cheonmado Island, which was drawn on the horse's cradle, came out of this tomb.Thus, Tomb No. 155 was named Cheonmachong, and became almost the only tomb where you can see the inside of the tomb.

Finally, a magnolia tree standing between the tombs is a point to watch in Daerungwon, which should not be missed in the picturesque photo zone. 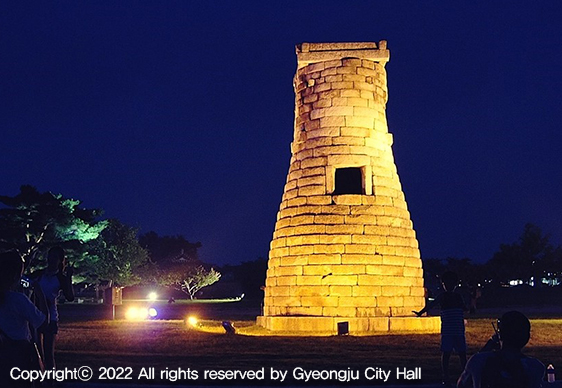 Cheomseongdae, the oldest astronomical observatory in the East. It is presumed to have been built during the 27th Queen Seondeok of Silla and is one of the landmarks symbolizing Gyeongju.
It is about 9m high, with a cylindrical part shaped like a liquor bottle on top of the base that serves as a pedestal and a top part shaped like a Jeong at the top.

The cylindrical part was stacked with 27 layers of fan-shaped stones. With the window in the southeast as the center, the bottom is filled with makdol, and the top is pierced to the top, making the inside empty. At the top, where the eastern half is blocked with pebbles, the end of a long stone that is engaged in a Jeong shape protrudes outward. This figure is also found in steps 19-20 and 25-26, and it seems to have been suitable for hanging a ladder from the inside.
According to the old records, it was said that "people are supposed to go up in the middle," but it seems that they put a ladder on the outside, went inside through the window, and then climbed to the top using a ladder to observe the sky.

The stones that make up Cheomseongdae have their own meanings. The shape of Cheomseongdae, which is round above and square below, embodies the sky and the ground. The 365 stones that made Cheomseongdae symbolize the number of days of the year, the 27th stone altar symbolizes the 27th Queen Seondeok who built Cheomseongdae, and the 29th and 30th stones combined with the top pavilion symbolizes the number of days of the lunar month.
While it is presumed that observers have entered and left, the upper 12th and lower 12th levels indicate a year, 12 months, and 24 seasons based on the window.
It can be guessed that Cheomseongdae was also used to calculate the movement of the sky to determine the timing of farming and to predict the future of the country. 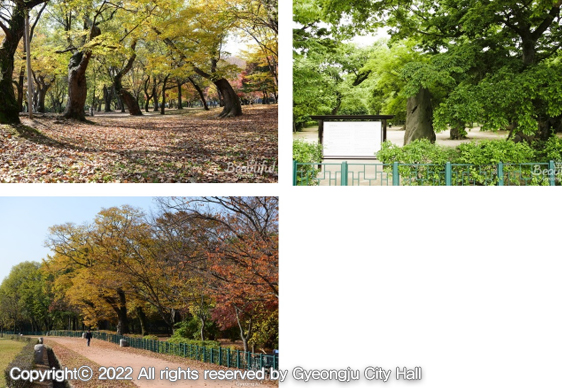 In the 9th year of King Talhae (65), the king sends his subjects to the west of Geumseong in the middle of the night when he hears chicken crying in the forest called Sirim.A small golden chest hung on a branch, contained a bright-looking boy, and a white hen was crying beneath it.

The child became more and more intelligent, and his last name was Kim, saying, "You know, it came out of the golden ark."King Talhae made Alji the prince, but did not receive the throne, and Kim became the king after coming to Kim Alji's six generations.

For the Silla people, chickens were considered very sacred as animals that defeated darkness and announced the morning, and the golden box symbolizes power, suggesting totem and gold worship.

The tomb in Gyerim is known as the tomb of the 17th Naemulwang (356–402) of Silla.King Naemul ascended to the throne for the second time as Kim, and since then, the hereditary succession has been maintained by Kim.He wrote "Maripgan" under the name of the king. 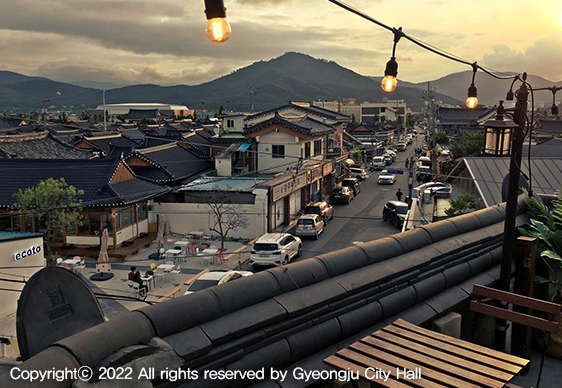 Hwangridan-gil is the youngest road in Gyeongju. It refers to the areas of Hwangnam-dong and Sajeong-dong on both sides based on the road from Naenam Intersection to Hwangnam Elementary School Intersection.
Young people began to gather a few years ago, and good cafes, cute props, souvenir shops, and unique restaurants were built. In the early days, shops were built around the roadside, but as the outer edge of Hwangridan-gil expanded, unique shops are being built one after another in every alley.

It has become an indispensable course for Gyeongju trips.
Go to the cafe you searched for, knock on the door of a restaurant you can see while walking, or find a cute souvenir to celebrate the race at the end of your trip to Gyeongju. Let's eat, drink, and enjoy it on Hwangridan-gil. 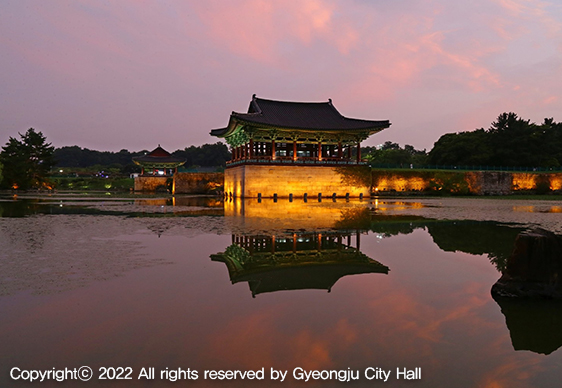 Donggung and Wolji, where the title of Gyeongju Night View is not a waste, may be more familiar with the name Anapji.
This place, which was ruined during the Joseon Dynasty, was called Anapji because it was a pond with a group of geese and ducks, and this was originally the site of the annex where the princes of the Silla Dynasty lived. So in 2011, I found my name Donggung and Wolji.

According to the records of the Samguk Sagi, the pond "Wolji" was created in the 14th year of King Munmu (674), and "Donggung" was built in 679, after the unification of the three kingdoms was completed. The "Imhaejeon" in Donggung was used as a venue for entertainment, meetings, and entertainment.
Donggung and Wolji show the peak of Silla landscape art.
Wolji, which has an east-west length of 200m and a north-south length of 180m, has a straight circumference in the southwest while a winding curve in the northeast.
For this reason, the entire view of the pond could not be seen at a glance anywhere, making it feel like an unknown sea. Imhaejeon Hall, which is used as a venue for performances, means a pavilion overlooking the sea, and it can be guessed around that the landscape of the pond wall represents the sea.